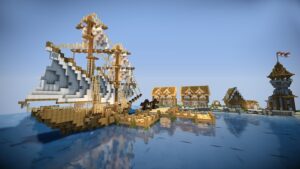 According to Kaspersky, Minecraft mods can be malware as they have spotted in Google Play Store, the malware shows the users unwanted ads, and can likely steal social media data.

Kaspersky experts had earlier discovered more than 20 malicious apps from Google Play Store that are were presented as Minecraft mods. Experts say that players should be cautious( they should double-check before installing the mods) for Minecraft, as these mods can be malware.

You will be surprised by the news that a cybersecurity firm caught hold of another whole bunch of malicious apps that are ‘displayed as Minecraft mods on the Play Store. Experts said that the newly developed malware could be a potential threat to users.

As it is well-known fact, that is one of the most popular games out there whether it is a PC or Mobile game. This game has been downloaded and played by millions of players so it is obvious that it attracts fraudsters.

If you don’t play this or want to know, why exactly players need to install these mods because it helps to add custom items, tools, and blocks to the game.

The research team of ‘Kaspersky Analyzed various apps, including those which are available for download on the Google Play store and as well as other app stores, and said that it could be modpacks (user-created packages with additional gameplay elements which help in improving the gaming experience of the players) for the game.

The mods that were found by the research team of Kaspersky “were totally useless from a user point of view”, and as soon as it is installed, it conceals its icons. Player’s can simply detect as these malicious apps frequently opened the device’s default browser and open various unknown websites in order to display flash ads and play videos from YouTube.

Moreover, these experts said that these apps’ new, improved versions of that they have detected in the past. These improved versions of malware would likely open the browser every other second, and then it will display full-screen ads, ‘ and with that makes the device unusable.’

And according to report experts from Kaspersky in which they said that “The version that we have analyzed, for e.g, this malware will open the browser every other minute, and with that, it also starts rendering the device. Detecting the root cause was especially troubling because it was extremely hard to figure out what was going on, how to stop it, and which app was responsible for the problem”.

Well, it is well known, that this is not the first time for a popular game to be used as bait by fraudsters for their own purpose and agenda, so it advised players that they should carefully check sources before installing mods to their devices. Apart from this, Team Kaspersky had already notified Google about the loophole and how this malware is functioning. And it is also confirmed that some of these malware have been already taken down by  Google Play Store.

ALSO READ  Where To Watch Anime For Free (2021) | Animeology

Check Out our latest blog related to gaming “Best PC Games Of All Time”.